So while I was in a fabric/ sewing store I came across these costumes templates. They are just these smock outfits that go you can put on top of a black top and leggings (or go naked if you want…..might be a bit weird if kids are around). I ended up getting a kids sized template- so this is just a kiddy costume post today.

So these cost $2.50 each! That’s a fucking good price. So you get this smock you cut out and sew up as well as a mask you cut out and put string on. I didn’t use the mask, it was make out of fabric and wouldn’t be comfortable to wear so I just tossed it but it could be easy replaced with make up or face paint. These templates also came with instructions so there wasn’t really a way you could absolutely fuck this up.

It was lucky I ended up getting two of these templates because I did fuck up one of these……but it wasn’t my fault. For once. So I cut up the skeleton templates (no issues), put it together and put it on the sewing machine. That’s when it went to shit. I had the watchful eye of my mum, who happens to be a master of sewing ( I’m obviously not her kid). I sewed the first arm holder with not issues but then the Machine decided it wanted to mess with me and it decided to not work anymore – turns out the machine is faulty.  So my original costume got a bit jacked from the shitty machine so of course I had to start again AND SEW IT BY HAND!!It was horribly time consuming sewing this small piece up but in the end it did come up alright. 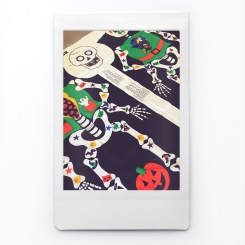 This is a very easy costume to make up, its not the top of the line costume that you would see on Pinterest. But really my main aim with making costumes is to have easy affordable ones which anyone can make up, because lets face it a lot of the Pinterest costumes (or pretty much anything) you see although they say they are easy but never seem to turn out like the photo.

But if you want to give this costume a go for yourself or your little one head down to your nearest fabric/ sewing store or just look up on google for one similar. These aren’t to hard to make for people who admittedly can’t sew (LIKE ME!!).