Beer Park Located at the Paris Hotel and Casino

I did my research with this place and this was definitely a place we had to go. I chose this place for the husband ( we had to go places he would like too), he is a very big beer drinker and we both love a good rooftop bar. This place was absolutely PERFECT. Its not what you would expect at the Paris Hotel , whenever I think of the Paris I think of high end bars and restaurants. Not roof top bars with beer.

If you want to enjoy a drink while over looking the strip and have a view of the Bellagio fountains show this is the place to go. Sure it is the quick and the dead for the strip views but thats expected. I liked this place because it had a very laid back feel to it and honestly I could have stayed all night if I wanted to.

Unfortunately I didn’t get a chance to get a cocktail. It was a very busy time of the day and the husband (although he won’t admit it) panicked when he felt a bit embarrassed the ordered a COORS beer in a HEINEKEN bar so he just ordered something random for me which was a Rum and Pineapple juice. Which wasn’t bad at all and it was served in what looked like one of those red cups you see in the movies at high school parties.

This is a place that I had never heard of in my search for bar around the Vegas strip. So this place is either relatively new or the last few times I visited Las Vegas I must have been that oblivious that I missed it.

We came across this place one night while walking around the Miracle Mile in Planet Hollywood (for those who don’t know its the shopping mall in Planet Hollywood) and we came across this bar called the Tipsy Robot. I admit it, Im a sucker for unique business names and this one defiantly caught my attention. So we were greeted by a staff member and sat at a bar with what looked like an iPad attached to the table. The staff member then explained what to do and all I could think of was “HOW COME NO ONE HAS EVER MENTIONED THIS PLACE TO ME!”

What was so spectacular you ask? Well. You order your drink on the iPad from a full menu of cocktails, you could even create your own, or add a bit extra to your favourite drink and a robot will create the drink your you. Right in front of you. This was entertaining to watch, to see machinery that looks like its meant to be in a factory putting together cars making me a drink.

Sure its a bit of a tourist trap, but guess what? I was a tourist. The drinks I found were made very nice, not as strong as the other drinks I drank on the strip. But I chalk that down to the fact that Americans aren’t as stingey with the alcohol as Australian bars. I did like this place it was different to see a fucking robot make me a drink. It made me feel like i was in a SCI-FI movie. 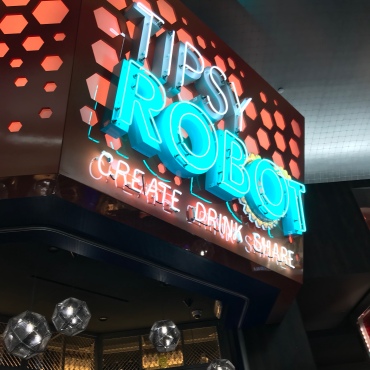 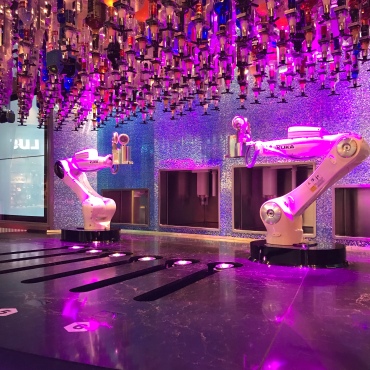 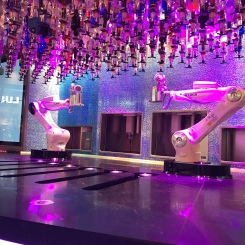 This Place has been talked about with everyone I know who has been to Vegas. Its a 3 level cocktail bar in a giant Chandlier, Sounds pretty interesting right. First of all this place is very beautiful, the whole bar draped in crystals. Made me feel very glam! We went to to top floor, we wanted to try the top and look around afterwards.

The cocktails list, err well they were very different. They didn’t really have many of the classic cocktails that I know and love, but I was willing to give something new a go.  I got the Finishing School Cocktail (Ciroc Red Berry Vodka, Lemon, Strawberry-Rhubarb Rose Syrup, Ginger Beer and Plum Bitters), it was a very strong drink I can tell you that much! I saw some reviews recently complaining that the drinks were weak, I don’t know what people were going on about these drinks packed a punch. The  flavour was really nice it was kind of a twist on the classic Moscow Mule cocktail.

I honestly think this is a bar to take your girlfriends if your having a night out, my husband I could tell didn’t want to be here too long. I think he was feeling a bit less manly in a glam cocktail bar. If I ever came to Vegas with my girls this would be a place to go to enjoy cocktails while dolled up. 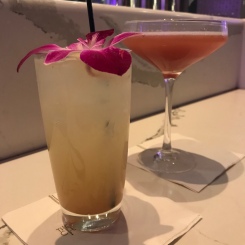 I seriously love Mexican food and drinks! If I could live on guacamole, corn chips and Margaritas…..I WOULD! I might save that diet for when Im old and grey and don’t give a fuck about what it does to my health. I was on a mission this holiday to enjoy good Mexican food and especially GOOD guacamole. I find that a lot of the places I’ve been to in Australia don’t seem to have good guac. Its either tasting a lot like fake avocado or they make it good but are so stingey with the portions that its practically a teaspoon. So while I was on a bit of a shopping spree at the mall i came across this place and caught a glimpse of someones food coming out. Definitely stopped me in my tracks and I set the plan for us to eat there that night for dinner.

That night we sat in the outdoor section, which was still undercover but under some trees with fairy lights (i love it), it made where we were sitting a little dark but it could set the mood for a romantic date. We ended up getting a jug of White Sangria to share between us, we would have got margaritas but we had a few drinks at FAT TUESDAY before hand and needed a little change from frozen drinks, otherwise we would be sick. I love a good sangria, this was so tasty and it wasn’t watered down like a lot of the others I have tried in the past.

We got an appetiser of Guacamole and corn chips between us, they did not hold back on the portions! It was so lucky we were sharing this otherwise this could have counted as a whole meal for me. The guacamole was made fresh and you could chose how hot you want it. For our main we shared the Fajita plate which comes out as a platter for you to put it together yourself (like most places). For a plate that really was intended for one person IT WAS HUGE! The beef was cooked perfect and had a bit of spice to it- I don’t complain about that I love me some spice. We only got one meal between us because for some reason when we travel over seas our jet lag messes with our bodies and we don’t feel hungry and we sometimes like to have a meal where your pick at it like finger food.

If I come back to vegas I will be coming here for sure, NOT KIDDING. The drinks, the Guac, the atmosphere, perfect for me. 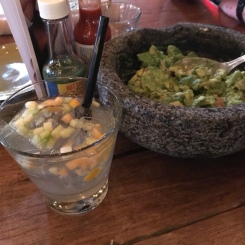 RhumbarLocated at Mirage Hotel and Casino

We stumbled across this place while walking out of the Mirage and thought why not take a look. It’s a great outdoor bar that allows cigar, cigarette and Hookah smoking. I’m not a smoker but the husband is so it was good for him to sit with a drink and a smoke and not be worried he would offend anyone. Of course seeing everyone else using hookahs I thought “hey why not give it a go” .

So I took a look at the Hookah Menu (yes they had a Hookah menu and a Cigar Menu…fancy) and I chose the Pina Colada Flavour. I’ve never used a Hookah and had no idea what to do or how I would go with the smoke. In my mind I just thought it be like a massive cigarette and end up feeling like shit. Boy I was wrong! After the lovely server told me what to do I got right into it. Straight away I tasted the Pina Colada flavour, I didn’t at all feel like I was smoking. It was great. So while I sat there with my Hookah and a bourbon and coke (we were in a cigar bar had to go with a bourbon) the hubs went on to try a cigar. He gave a sweet cigar, vanilla berry flavour (yep I had no idea they came in flavours like that) it didn’t smell bad but I couldn’t bring myself to try it. I was planning on trying it but I was to afraid it would make me feel sick.

The drinks were made perfect I couldn’t fault them and the hookah was awesome to try its making me contemplate investing in one for home. Maybe….I’d probably have a shit one with shit flavours. 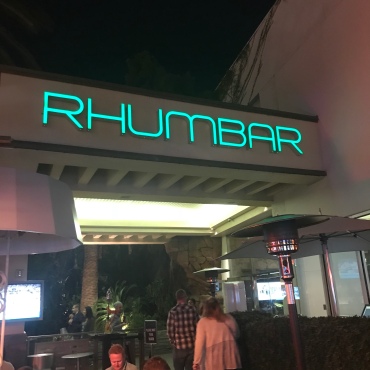 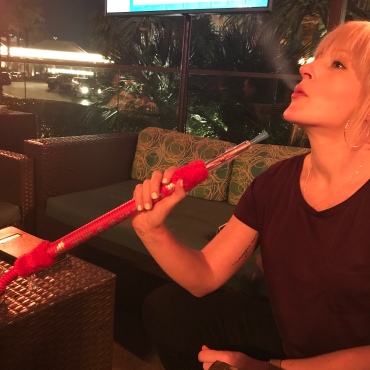 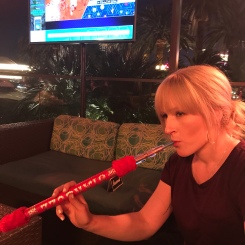 HighRoller Located at the LINQ Hotel and Casino

I was well aware that the HighRoller existed, but on my previous trips I had really no interest in going on it. Mostly because I find Ferris Wheels boring and there’s one very similar in Melbourne that I absolutely have no intentions to go on. This being said I did change my tune when I found out there was a freaking bar on some of the carts.

Well that sold me! Sure you have to pay a little extra for the bar carts but it was worth it, you go around for 30 minutes and can drink as much as you like and in a cart with your group. Pretty good. We went during the day because we figured it would be a lot more busy at night. The drinks and the view were fantastic I just wish the Bellagio Fountains were going while we were at the highest point. But I guess so does everyone else. Defiantly make sure your armed with a camera or your phone plenty of photo ops.

I asked the bartender to make me a sweet rum drink, because I had a mental blank and could not for the life of me think of anything to order (blonde moment). So she made up something that looked like it  had pineapple juice, red cordial and rum. Kinda like a errr rum sunrise – if thats even a thing. The stupid idiot I am forgot to ask. 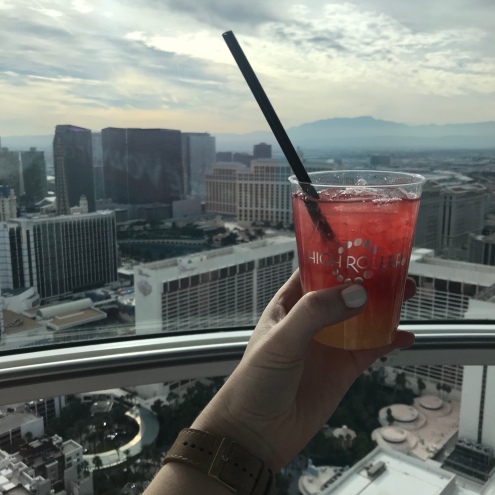 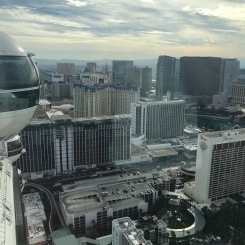