For years Ive been curious to take a look at the Mind Body Spirit Festival, thats held annually in Melbourne. A few years ago I registered to the festival so it could kind of be my push to go. I even received a free ticket to go but for some reason I’ve never been motivated to go – partly because I never had anyone to go with me and the idea of driving through Melbourne CBD looking for a carpark started to stress me out. Not to mention the million of dollars Id most likely have to pay for parking.So the Mind Body Spirit Festival is a health, wellbeing and Natural therapies event. That travels all around Australia and was in Melbourne 8th June – 11th June at the Melbourne Convention & Exhibition Centre.

Ive wanted to go and check it out for years, but have never had anyone. Until this year when my mum decided to have a little adventure with me. We met at my place and ended up catching the train into the city together. Is seemed like a better choice, she lived an hour away from the CBD were I only like 15-20 minutes so it would have been a lot less stops and she wouldn’t have to be on a long ass train ride home at peak hour with no chance of a seat (trust me people at peak hour are dicks, with limited seats its every man for themselves). So we caught the train into the city and stopped off at Melbourne’s Southern Cross train station. It was only a short straight walk to the exhibition centre and it worked out perfectly with us able to get a coffee on the way to help us with the cold, wet Melbourne weather. 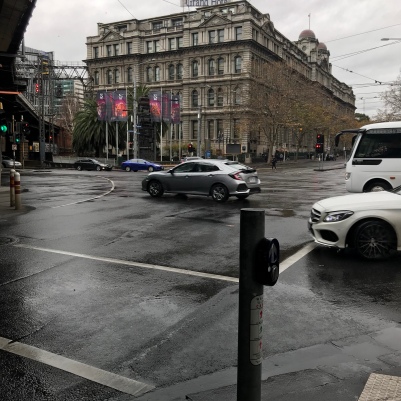 When we arrived in the CBD we headed to a cafe along Spencer street right near the train station. While rugged up all dry and warm and enjoying my large coffee looking outside at all of the people in the miserable weather all I could think about was “God by the time I get to the exhibition building I will look like a fluffy hot mess!”. But as I got further into my coffee the rain lightened up and only had some slight spitting. So once our coffees were finished up we headed down to the exhibition building.When we arrived and scanned our tickets we were given an empty bag and a map of the expo. The bag was obviously for all the info booklets from stalls and all the goodies you purchase.

It was busy, but not crowded with people pushing and shoving making the experience uncomfortable. We ventured from stall to stall until we stopped at a tea stall that caught our eye. The Tea Tonic ( teatonic.com.au ) stall was bright and colourful with all of the staff wearing flowers in their hair with bright fake eyelashes. When we started looking at the large range of teas we were handed tester after tester of the tea range. From Hemp tea to Coconut tea we had it all. Each tea was delicious and all included a bonus of some sort of health benefits, I seriously would have bought them all. I settled on just one (it was a lot of restraint to stick to one) I bought the traveller pack and took a booklet with details for the website so I could order more. I bought the BLUE MAGIC TEA, it was an organic tea with a Vanilla Rose Flavour. I was sold with eh flavour and when I read up of the benefits the tea had, it was a total bonus. The tea “boosts lustre of your hair, skin and eyes” and also is caffeine free (so I can drink it at night) which was a big bonus.

After we had our fill of many many flavours of tea we continued on around the expo, looking through many stalls which crystals and card reading we reached a stall were my balanced was tested……it was something I was already aware of , my balance is off. This was no secret to me due to having to carry a tall, heavy toddler awkwardly when she’s kicking and screaming and always ages away from the car. It obviously can do a number on your body. But after I had my balance tested the staff member at the stall recommended these orthotics for my shoes and demonstrated how my balance would be greater by using them. He basically put his weight on my hands to try tilt me over, both time hurt like hell because he was pressing down on my ring finger and it sobbed into my hand. After he had told us the price of the orthotics ($400!) we had thanked him for his time and continued on.

After looking through many of the stands I was stopped by one that stood out to me. The AT Hemp Stall ( www.athemp.com.au ), not because it was hemp. But the big sign out the front of it with a list of benefits the hemp creams had. Now this is a bit of an issue with me but I have varicose veins on my right leg due to many years of landing for long as periods followed by standing for long periods when pregnant. Im pretty upset about them but its not like I can hide them, especially in summer. So for many years Ive wanted to find a natural remedy to reduce them without having surgery. I saw that one of the conditions this hemp cream can help with is varicose veins – I had to check this out! So after a long chat with the staff at the stall I purchased a Jar of EASE hemp oil lotion. I thought well why not give this a go to see if it will save me a trip to surgery.

After our walk around the expo and a few shots of herbal alcohol, Yep I managed to locate alcohol and they kept pumping shots to me to try. We had decided to go back to a stall that we wanted to take a look at towards the beginning of the expo but was too busy when we first went up to it. It was the coconut Latte and hot chocolate stand ( https://www.silkycocovelle.com ) I had a small tester of both the hot chocolate and the latte. The hot chocolate really just tasted like a normal hot chocolate, which I’m not a huge fan of really. But the latte, WOW! It was amazing it tasted a lot like a coconut rough warmed up. I literally could have drank every tester of that drink because t tasted so amazing and ended up buying 2 packets from the stall. Once we had finished up our purchases we headed to the exit and went on to Crown Casino across the street for lunch before we headed home. Side note; because we cut through the casino to get to the food places I got carded! It made my day to get carded, it mustn’t have looked as haggard as it thought.

Overall I do regret not coming to this Festival sooner. I found the whole experience great with every stall interesting and worth a look. Im more than excited to use my Hemp lotion and drink my coffee and tea. I will be defiantly going next year!! If you want to take a look for a bit of info about the Mind Body Spirit Festival check out the website below: 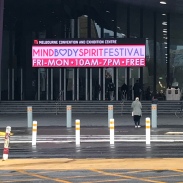