So its no secret Ive been doing Pole dancing as a hobby (its becoming an addictive lifestyle) for many years now. Ive taken many videos and photos in class to record my progress as I move on it levels. But what I have wanted to do it have a professional photo shoot with me looking fabulous instead of a sweaty mess with fuzzy hair pulled back into a tiny bun. So I wanted to have a nice shoot, with good lighting and me looking half decent while showing off my strength  with amazing tricks. I wanted to keep these photos for when Im old and decrepit and to show off that at some point I was strong and fit doing something that resembles a very watered down version of Cirque Du Soleil acrobatics.

Fortunately enough for me they were holding photoshoots at the studio I go to and at a decent price too. So I booked in and then began the search for an outfit to wear to the shoot. Small side note, I booked this shoot well in advance BEFORE I found out I was pregnant and my body decided to go nuts and give me a huge ass rack and bloated gut (that made me look like I just had a massive weekend). So originally I was looking for a matching set or something that could really work together and look great. Well that shit went out the door very quickly, my aim was to find something that didn’t make me look like a freaking heifer. I ended up wearing a simple black crop and mermaid patterned high waist pole shorts (that presented a lot of booty).

On the day I wasn’t overly bloated like I had been in the lead up (good old hormones) so I wasn’t too stressed. I had my makeup done by my very talented cousin and just gave my hair some messy waves to make it look presentable. when arriving at the studio I did have a bit of time before my scheduled time so I used that to warm up because I didn’t want to pull anything while taking photos. Stretched up and was ready to go. Now this was a 30 minute shoot, going into it I thought it wouldn’t be hard at all I do 60minutes or longer in classes and practice (I actually thought it would be long enough) my god I was wrong!

I was shooting on a spinning pole so she could make sure that she could capture me at the right angle. This proved to be a big strengthening exercise because I would have to hold the pose, while spinning and keeping it looking neat and my face not looking like I was constipated. I was pretty happy with the fact that I remained grippy on the pole and didn’t constantly slide down like I usually do in class (I’m a slippery Susan). After the whole 30 minute were up I felt like I had a pretty decent workout while in a fateful of makeup and styled hair. The turn around was extremely quick and I received my proofs to pick out which ones I liked and wanted edited and to pay for.

I ended up buying 4 edited photos and I must say Im pretty proud of the outcome. Sure I could nit pick about how I look physically (Im a bit bigger than I normally am) but Im still happy with how these turned out. Pretty impressive I did this while knocked up. I think the goal will be for another shoot after spawn number 2 makes its exit and Ive re-gained my strength and lost some of the chub. It was a good experience and these photos are something I can look back on when Im old and grey with saggy tits and say “yeah I was a strong badass”. 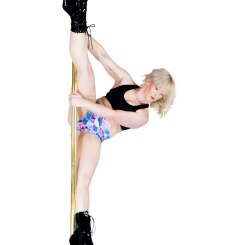